Concrete is one if the most used building materials worldwide. With up to 80% of volume, a large constituent of concrete consists of fine and coarse aggregate particles (normally, sizes of 0.1mm to 32 mm) which are dispersed in a cement paste matrix. The size distribution of the aggregates (i.e. the grading curve) substantially affects the properties and quality characteristics of concrete, such as e.g. its workability at the fresh state and the mechanical properties at the hardened state. In practice, usually the size distribution of small samples of the aggregate is determined by manual mechanical sieving and is considered as representative for a large amount of aggregate. However, the size distribution of the actual aggregate used for individual production batches of concrete varies, especially when e.g. recycled material is used as aggregate. As a consequence, the unknown variations of the particle size distribution have a negative effect on the robustness and the quality of the final concrete produced from the raw material.

In the classification data, nine different grading curves are distinguished. In this context, the normative regulations of DIN 1045 are considered. The nine grading curves differ in their maximum particle size (8, 16, or 32 mm) and in the distribution of the particle size fractions allowing a categorisation of the curves to coarse-grained (A), medium-grained (B) and fine-grained (C) curves, respectively. A quantitative description of the grain size distribution of the nine curves distinguished is shown in the following figure, where the left side shows a histogram of the particle size fractions 0-2, 2-8, 8-16, and 16-32 mm and the right side shows the cumulative histograms of the grading curves (the vertical axes represent the mass-percentages of the material).

For each of the grading curves, two samples (S1 and S2) of aggregate particles were created. Each sample consists of a total mass of 5 kg of aggregate material and is carefully designed according to the grain size distribution shwon in the figure by sieving the raw material in order to separate the different grain size fractions first, and subsequently, by composing the samples according to the dedicated mass-percentages of the size distributions.

For data acquisition, a static setup was used for which the samples are placed in a measurement vessel equipped with a set of calibrated reference markers whose object coordinates are known and which are assembled in a way that they form a common plane with the surface of the aggregate sample. We acquired the data by taking images of the aggregate samples (and the reference markers) which are filled in the the measurement vessel and whose constellation within the vessel is perturbed between the acquisition of each image in order to obtain variations in the sample’s visual appearance. This acquisition strategy allows to record multiple different images for the individual grading curves by reusing the same sample, consequently reducing the labour-intensive part of material sieving and sample generation. In this way, we acquired a data set of 900 images in total, consisting of 50 images of each of the two samples (S1 and S2) which were created for each of the nine grading curve definitions, respectively (50 x 2 x 9 = 900). For each image, we automatically detect the reference markers, thus receiving the image coordinates of each marker in addition to its known object coordinates. We make use of these correspondences for the computation of the homography which describes the perspective transformation of the reference marker’s plane in object space (which corresponds to the surface plane of the aggregate sample) to the image plane. Using the computed homography, we transform the image in order to obtain an perspectively rectified representation of the aggregate sample with a known, and especially a for the entire image consistent, ground sampling distance (GSD) of 8 px/mm. In the following figure, example images of our data set showing aggregate samples of each of the distinguished grading curve classes are depicted. 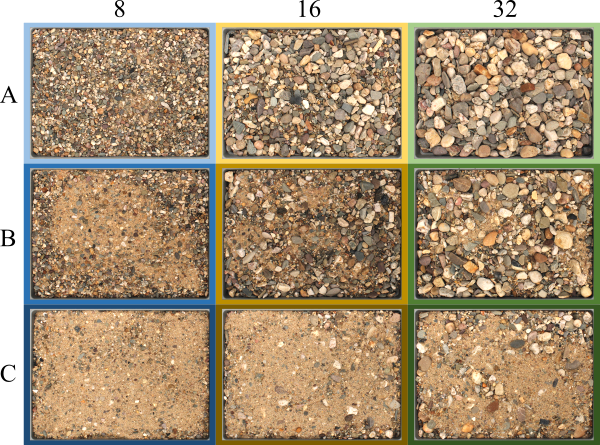 If you make use of the proposed data, please cite the publication listed below.